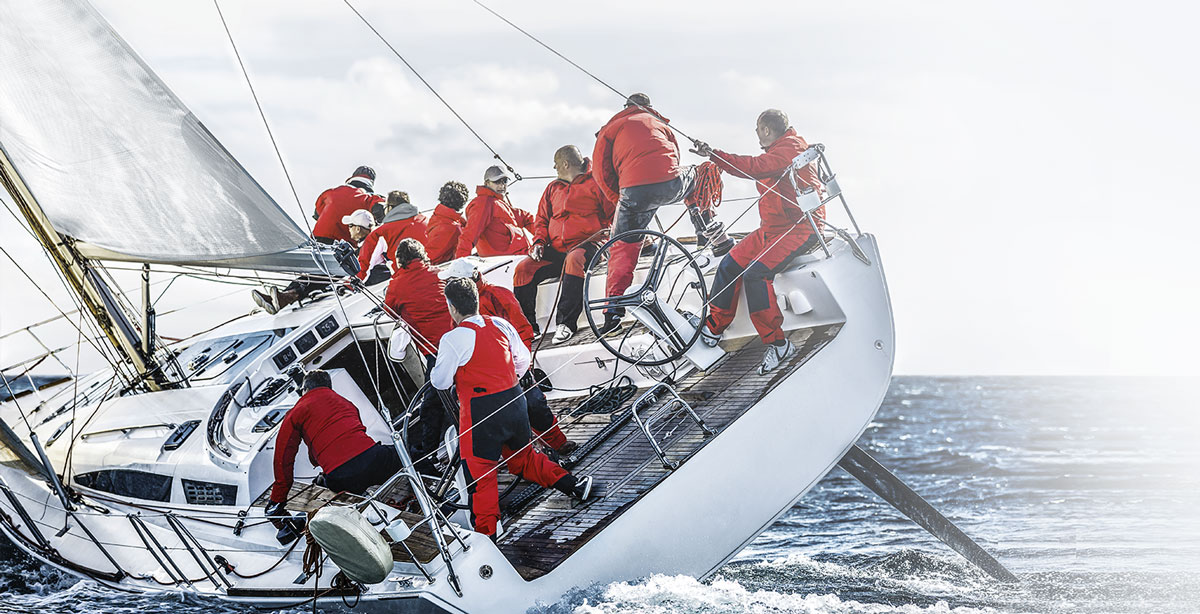 Controlling remains indispensable even in times of volatile markets, skittish customers and rapid changes, says Dr Klaus Eiselmayer, functional head of the Controller Akademie (CA). In an interview on the future of controlling with Wolff von Rechenberg from the on-line platform Controlling-Portal.de, Dr Eiselmayer compares planning and budgeting with preparing to cross the Atlantic in a sailboat, saying good planning is important especially because it could become stormy along the way.

Von Rechenberg: Dr Eiselmayer, you once compared controlling with budgets to sailing. What did you mean?

When I set out in a sailboat, I might want to cross the Atlantic, for example, or maybe just spend a nice weekend on a nearby lake. The requirements for the crew and the equipment depend on what I decide to do. If I plan to cross the Atlantic, I need an ocean-going vessel, a trained team and appropriate safety gear. If I am going sailing for a weekend getaway, my focus is on the picnic basket, cold drinks and nice weather for the family. In the case of an Atlantic crossing I will anticipate bad weather and deal with it accordingly.

Preparing for the trip stands for planning and budgeting?

Planning and budgeting always have to do with “wanting.” The issue is not “what will probably happen,” rather “what do I want to happen?” This means I have to prepare based on what I want to achieve; action plans and their costs need to be planned. The word “planning” is an appropriate generic term for this, although we subsequently refer to “operational and strategic planning” as well as “long and short-term planning.” The term budget means – more or less – the detailed plan for the next financial year. It is the commitment, pledge or obligation, expressed in figures or actions, to work towards the declaration of intent I just mentioned, the objective.

Well, crossing the Atlantic is a rewarding task for the controller. But markets are becoming increasingly skittish, customer demands ever more individualised. How is reliable planning even possible in these circumstances?

Last year a friend of mine participated in a transatlantic crossing. But he had to postpone his return flight twice because a reliable prediction of the weather was simply not possible. Nevertheless, planning still makes sense as a declaration of intent. If I work today in a volatile environment, I have to live with the fact that reality may rapidly overtake my plans. This means I have to develop more than just a declaration of intent, I also need to prepare a statement of expectations – also called a forecast – announcing, for example, my belated arrival. You can never prevent variances, but it is easier to deal with variances announced in advance. And no matter whether I work in predictable or rapidly changing markets, you have to adapt and prepare for it. If I expect a slump in sales, there should be enough cash in the till to survive the dry spell. An appropriate credit line at a bank could mitigate such a problem, too. This is known as risk management, an important component of planning.

It is increasingly difficult to define objectives amid constant, dramatic changes in the market. What options do controllers have?

From an owner’s perspective a company is viable over the long term if it meets its profit expectations on average over a specific period of time. That being said, there need to be some minimum objectives that must be achieved, even if the fairway is difficult. In this case you might replace the profit objective with a range of targets defined relative to expectations for interest rates, for example, or to your own goals for growth, taking into account the resulting need for financing. Sales targets can be formulated as a fixed goal, for example 100 million euros, or defined as a relative objective, such as achieving or defending a 50 per cent market share. I think it makes sense to use a combination of such objectives. It’s that way with costs, too. They can be planned in both absolute terms and relative to sales. Here you are faced with the challenge of structuring your cost base so that if you expect capacity utilisation to decline, you are still able to influence at least a portion of the costs, through outsourcing, for example. In the past some international companies have succeeded at offsetting worse results in one region with better results from others where business has exceeded expectations. The overall objective could be achieved – albeit with positive and negative variances in individual regions.

The right combination is the key. No matter how reasonable relative objectives are, it won’t work without absolute objectives. If a company receives equity from its shareholders, the shareholders expect to receive a return that must be achieved. To do that, the company must generate more sales than the costs it incurs to realise them. Overall, it is becoming increasingly important for companies to make their own organisational models flexible so that they are better able to respond to fluctuations in the market. You would do that by going through planning scenarios and identifying sensitivities. There are a variety of ways to boost flexibility, for example by implementing flexible working hours, i.e. setting up compensation time accounts, by using outsourced personnel, through outsourcing of individual services that are not a core competence, or even by outsourcing production completely. This flexibility is not for free, of course. Your own costs will rise somewhat, meaning customers ultimately have to pay through higher prices.

Do the controller’s traditional tools – their standardised models – still function amid such conditions?

Strategic and operational planning including budgeting are important because they describe where you want to go in terms of your organisation, customers and employees. If the environment becomes more volatile, it is not enough to respond with supposedly better and more detailed plans. A good report is one that results in action. If volatility rises, actions – and strategies – have to adapt more frequently. What’s needed is a regular forward-looking view, i.e., forecasting. Departments such as procurement, development or production are often not able to modify their costs over the short term. You can’t address that with just better controlling tools; instead, you need to ask the question whether the organisational structure can be adapted to meet the requirements. A company like Apple, for example, focuses on development, design and marketing. It has outsourced its entire production to suppliers in Asia. This means that Apple itself generally doesn’t need to worry about utilising production capacity, even though there may be some contracts that guarantee a specific minimum utilisation for the producer. If I, for example, believe my core competency is in producing high-quality goods at my own production facilities in Germany, I will find it difficult to offset market fluctuations. An order backlog might help in this regard, for instance advance purchases that can be scheduled out into the future. Otherwise I might have to try utilising my production capacity by temporarily lowering prices in order to survive such a phase.

Proponents of the “beyond budgeting” idea challenge the whole concept of command and control, including traditional controlling tools such as planning, budgeting and actual-to-plan variance analysis. Where do you stand on that?

We have dealt extensively with the “beyond budgeting” idea in both the Controller Akademie and in the International Controller Association (ICV). Proponents of this approach refer in particular to the disadvantages of traditional controlling, such as adherence to static budgets. I remember one example that was mentioned: a German retailing group identified unexpected sales opportunities in France but was not able to exploit them because the marketing budget was allocated to Germany and also spent there, although it was not even necessary. This example, though, merely shows the wrong way to work with traditional budgeting. And that, however, does not mean traditional budgeting should be abandoned completely, rather you need to handle the tool better. A company must prepare a forecast showing its sales opportunities in different markets. The marketing budget must then be adapted and shifted depending on where sales are expected. Anyone who blindly adheres to a static budget is simply making a mistake.

Is the motto therefore: Don’t abandon planning and budgeting. Enhance them?

Exactly. We illustrated this once at the ICV with the following example: if a doctor prescribes a drug for a patient and later determines the drug is not working, the doctor won’t just stop prescribing the medicine and try nothing further. The doctor will change the dosage or the drug, whatever it takes to achieve the goal of healing the patient.

You are a member of the CA Akademie’s Board of Managing Directors. What skills should young people attain if they aspire to join the controlling profession in times like these?

They need to have the requisite functional skills of course, from accounting to reporting. The issue today, however, is not just to collect the numbers but also to sell them. This means the controller must have knowledge of the processes and the market environment in which the company operates. Internally, controllers should have an overview of the relevant processes and their costs. The important thing is to have an overall view of the company’s supply chain, from supplier to production to customer. Controllers must want and be able to reach out to people. We like to say controlling is the marketing of accounting. This means the controller’s task is to make people familiar with the tools and information from the systems so that they can make better decisions, even amid uncertainty and time constraints. Resilience will be in demand, too. You can’t plan when a crisis will come, and when it does come, the controller will have a lot more work to do because the company will need options for action. At the same time this also means that controllers will increasingly be called upon to think in terms of alternatives, i.e. in scenarios. I am also a member of the Management Committee of the International Group of Controlling (IGC), where we developed the controller’s competence model that the Haufe Verlag recently published.

is the editor of the on-line platform Controlling-Portal.de, where he reports on multiple topics, including developments and change processes in management and controlling. A newspaper journalist by trade, he switched to the online world and now works for reimus.NET GmbH, an Internet and publishing company based in Brandenburg that is also the operator of Controlling-Portal.de.

published on Controlling-Portal in german language